"The twins loved it! Everyone made them feel very at home and they really enjoyed all the attention and fuss that was made of them."

Just a month after signing her twin baby girls, Gracie and Evie, up to Models Direct, Mum Julie was contacted by our assignments department about an exciting opportunity for them to appear in the BBC hit series 'Mistresses', Britain's answer to 'Sex In The City'.

The twins, from Belvedere in Kent, had been selected to play the part of baby ElsaIn the series, Elsa's mum is Siobhan, the 'hardworking mum whose life isn't quite what it seems' played by actress Ola Brady.

Five million viewers tuned in for the launch of 'Mistresses' when it first graced our screens back in 2008 . This year we saw the second series, which starred our very own baby models. As a truly inclusive modelling agency, Models Direct were able to provide the BBC with just the 'look' they were searching for!

The twins have been given the star treatment by the BBC whenever they go to Bristol, where filming for the series takes place. They have enjoyed luxurious stays at Bristol Marriot Royal Hotel, and were collected by a driver whenever required at the studio.

We spoke to mum Julie about how the twins are finding life as TV stars. "We've just finished filming the first two episodes of 'Mistresses' second series and the twins loved it!" she said. "Everyone made them feel very at home and they really enjoyed all the attention and fuss that was made of them. We look forward to doing the rest of the series."

For this kind of work, models are often required to have an 'everyday' look that makes the film or show accessible to anyone, depending on what the specifics of the job are. It turns out that the baby twins are perfect for the role. Not only do they enjoy the assignments, they have received some excellent feedback from the television crew! 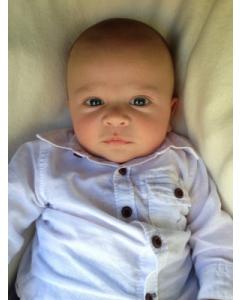 "I registered Stanley with Models Direct because everyone kept saying that Stanley is a beautiful baby and that he should get into modelling. I chose Models Direct because they are friendly and professional and are dedicated to their client's needs. Stanley has just attended his first photographic shoot on behalf of a company called Kit for Kids, and I have to say it was a great experience! The babies were rested when they needed to be and the whole shoot was tailored towards ensuring that the babies were content. Stanley thoroughly enjoyed himself and I had a proud mummy moment watching him smiling and posing for the camera! I would definitely recommend this experience to others."