Baby model Mirah was chosen to star in a film for Southern Energy. Her mum reported back to Models Direct after the assignment...

"It makes you very proud to see your baby enjoying themselves and it gives you something to look back on in the years to come." The Edge Picture Group came to Models Direct looking for a baby to star in a Southern Energy film to be shown internally. The baby they were looking for had to be around ten months old and have an olive, Spanish-looking skin tone. Models Direct offered a number of babies to choose from, and in the end it was baby Mirah who was selected.

Mirah's mother Heather took her along for her first ever modelling assignment and it turned out to be a lot of fun for both of them. Mirah was filmed sitting in a high chair alongside another model who was playing the role of her mum. Later she was to fall asleep in the woman's arms. This could have caused problems but luckily Mirah dropped off right on cue!

What did Heather think the best part of the day was? "Seeing how Mirah reacted to the situation, which was in a very positive way," Heather responds. "She seems to be a natural in front of the camera."

Heather also offers some advice for other mums considering a modelling career for their babies. "If you think your child is suited to being a baby model or in front of a camera with lots of people, then give it a go," she says. "It makes you very proud to see your baby enjoying themselves and it gives you something to look back on in the years to come. Being paid is also a bonus!" 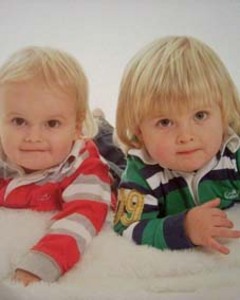